Few things honk me off quite as much as abandonware, especially when something good is abandoned. Microsoft could abandon everything they make and I would not care, none of it is a quality product. Other things really hurt.

You are reading this because there was yet another Qt question on the Qt mailing list from yet another person creating yet another glorified text editor/crippled word processor. I think this one was supposed to support markup language. I cautioned them against creating future abandonware and pointed them to existing Qt based word processors some of which had already been abandoned and had most of the features they wanted. After building it all they would have needed to do was add support for their special syntax.

Given the fact they were working in C++ and Qt I first pointed them to KATE. This editor has been around a long time and recently made the hop from Linux to Windows. Most importantly, if you scroll just shy of halfway down that page it tells you how to build just KTextEditor, the editor component used by KWrite and KDevelop. It’s probably also used on a hundred other lesser known or private projects. Why re-invent the wheel if all you need is a couple of tweaks to the KTextEditor?

Nah, they didn’t go for that. NIH (Not Invented Here) syndrome in full bloom.

This got me thinking about all of the other text editor and word processor abandonware I’ve encountered over the years. KWord was a serviceable word processor. It was abandoned for the ghastly Calligra Words project. All mention of KWord is slowly being purged from the Internet. You can still find a snapshot of the KOffice source code here which includes KWords.

Adding insult to injury, Oasis was a Qt based word processor which began as a Qt example program. Basically, Oasis was about 2-4 years ahead of where the poster’s editor currently was. There are literally thousands of these things out there.

That brings us to one of the most painful abandonware cases ever.

I will skip over the massive OS/2 abandonware issue, well, at least most of it. Lotus SmartSuite was and still is a particularly painful part of the abandonment. Some of these pictures are going to seem really grainy. When you install Lotus SmartSuite on Windows 10 or really any Windows after 98, the fonts it installs are old. They are from a time when SVGA was the bleeding edge of screen resolution and the bulk of the world simply ran VGA. I didn’t feel like lowering the video capabilities of the VM. One adorable quirk the product had was the “floating file cabinet.” A thin little bar you could move around on the screen. Each of those brown wood grained buttons is a “drawer” where things are filed.

Lotus 123 ruled the spreadsheet universe. Honestly, the last version of 123 ever released is still ahead of Microsoft Excel.

Lotus Approach was a victim of zero marketing. I’m not saying it was a fantastic database, it was a fantastic report creation system driven by a database. For years I had my expense tracker system in Lotus Approach. Why? The data entry screen took about ten minutes to set up. The actual expense report with beautiful fonts, perfectly aligned columns, group totals and grand totals took about thirty minutes or so to create. It really looked professional too. Microsoft Access is still trying to get where Lotus Approach was when it was abandoned.

The calendar and address book portions were kind of cool. With hundreds or thousands of such things around today most of you don’t realize just how ground breaking it was to have such things all integrated. This was back when we were still shipping software on floppies remember. You could double click a spot there to create a new appointment for today or you could open up the calendar application and be greeted by a full software version of a Daytimer planner.

Yes, you could change the view to be a week, month, whatever. I used the Lotus Organizer a lot. Those little Daytimer planners were getting to be hundreds of dollars when I stopped using them.

Everything was integrated for the very first time. You don’t think much about that now if your company has a pricey, unstable Exchange server, but this was a major feat. You really needed to have Team Center email at your company to get full use out of the email integration part. As I remember it didn’t work well with the Internet email of the day. Having said that, we didn’t have email standards yet. A regular person couldn’t send email from Compuserve to an AOL user. Every ISP wanted to own the Internet and all its content. The best way to do that was have a proprietary email system. Big Government had to step in and thump that. Today you don’t even think about the @someUrl.Blah portion of an email address when you send an email, but there was a long, dark period when you couldn’t “just do it.”

Don’t dis the layout of the address drawer too hard. It matched what the executive secretary had on their desk. A low level clerical person like a receptionist had a great big Rolodex of cards. The higher you went in a company the smaller and more stylish your list and address tracker became. You had people to do things for you. Those people had the great big Rolodex. You only had to keep track of the executives in Mahogany Row and a few special friends outside of the company. I seem to remember mine having the slider on the left. Honestly, I just threw it out when I changed desks this past fall. 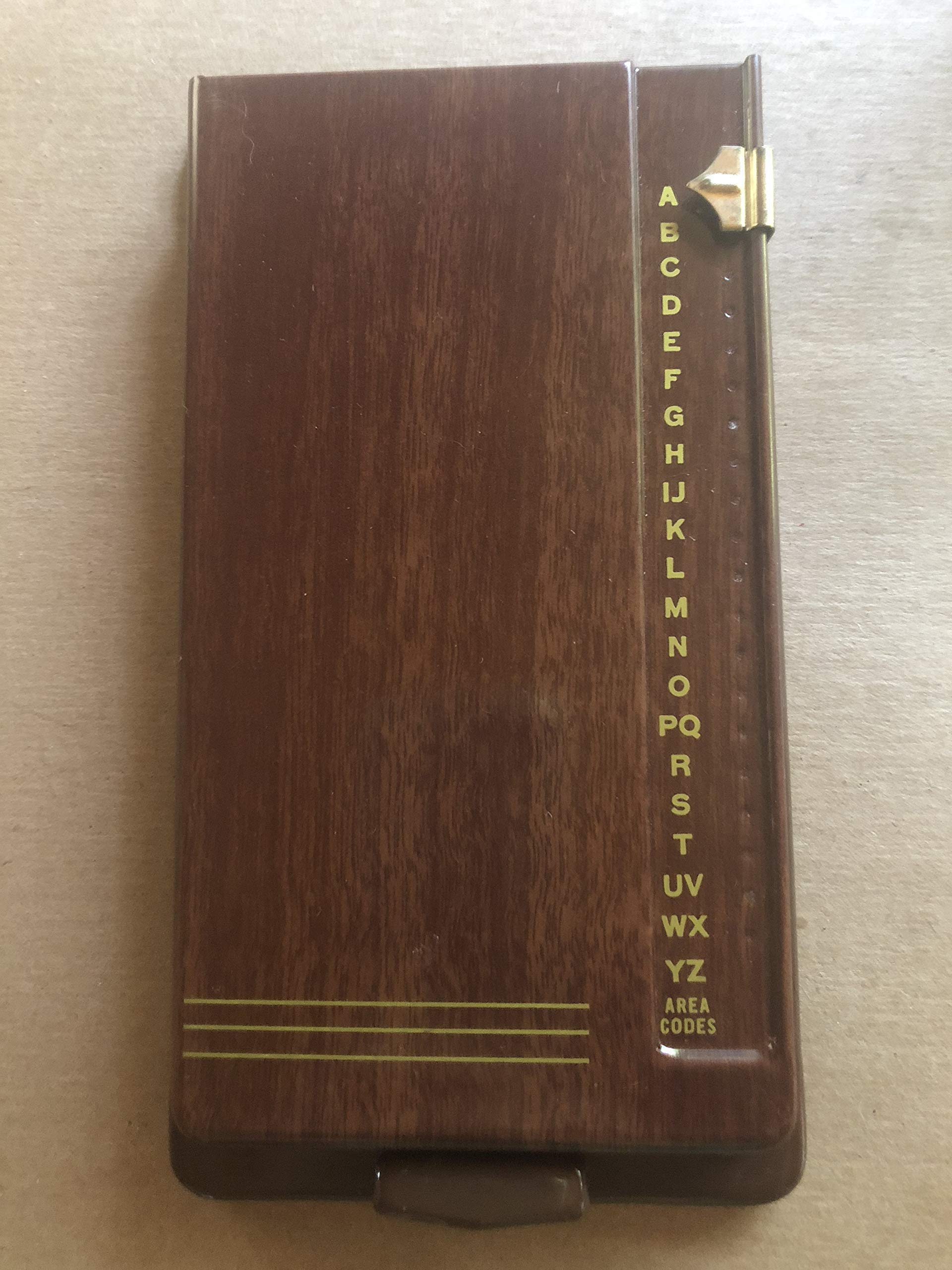 The slider worked because the cards inside had cut edges. The slider hung well down below the card edges. You slid the slider down to say, K, and then clicked the open button. All of the cards before K were missing the indexer edge.

Lotus WordPro was and still is the best word processor for a writer ever created. It has features that were and still are earth shattering. In particular Sections and Divisions are something nobody else has really duplicated. There is a claim Scrivener has something similar, but I haven’t played with Scrivener yet. Installed Scrivener in a VM and basically forgot about it. Had it not been free to try I probably wouldn’t have even done that.

As you can tell by the list of supported file formats, WordPro has not been updated in a long time. We really need a Change.org campaign to get the federal government to pass a law requiring vendors to Open Source anything they abandoned posting a fully tested build script with all source on both GitHub and Sourceforge. We have simply lost too much. IBM didn’t kill this off because they launched a competing product. They killed it off because they got out of the PC software business not long after the death of OS/2. At least that was the story, but Lotus Notes is still around.

Don’t confuse these tabs with tabs for different documents that lesser word processors use today. These are Divisions. You can even change the color of the Division tab along with its name so Research can be one color, To-Do list another, etc.

Notice in the bottom box of the print dialog that you can choose to print only the current division. I should point out that when you drag divisions to different locations you actually change their position within the file hierarchy. The next part should really blow your mind.

Take a good look. Notice the green “My New Section” tab is within the “Body” division. Every Division can have however many Sections within it. I don’t know if there is a physical number hard coded into the design or the only limit is the combination of physical memory and disk storage. Sections are amazing!

Sections for Chapters 2 and 3

Notice that I created Sections for Chapter 2 and Chapter 3. To make them stand out I gave each tab color.

Notice that you can just drag and drop a section to a new location. When writing a book it is often the case we have to re-arrange chapters. No matter what widely known word processor you are using now you are either selecting huge chunks of text to delete then paste in a new location, or you are simply deleting the stuff and retyping from either a print out or pdf. When an editor tells a WordPro user to make the third chapter the first chapter, it’s no big thing, drag and drop. Oh! You may have to fix some stuff in the text itself due to story line, etc., but the mechanics are no longer a horrible error prone thing. 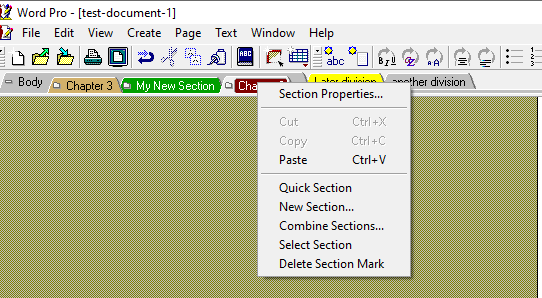 I imagine the cut and copy items are grayed out because Windows 10 has a different paste buffer API than Windows 3.1. Just a guess though. I just wanted to show you the right click section drop-down menu. It lets you do quite a few things. I just don’t feel like going through section mark and combine right now.

The last thing I wanted to show you is dragging a Section from one Division and dropping it in another. People who don’t write for a living or to just be an author probably don’t understand just how indispensable this ability is. A professional writer or someone who hopes to one day be a professional writer must always have an open scraps Division. Never just nuke a chapter, scene, whatever, put it in a scraps Division. This advice is especially true during early external editing phases and “I got lost in the middle of the story” rewrites. That problem spot may get fixed and re-added. You may learn (because your editor informs you) the reason that problem spot was a problem is because you screwed something else up way early in the work.

It happens man. Adding insult to injury, it will be something you dropped in, not even caring about it. You gave some character a disability or background trait that sounded so good for five to seven sentences, then it never came up again in the book. Well, not until you got to the end of the book and now you need that not to exist only you are so far past it you don’t remember why or if it was a really important thing when you added it. Yeah, you aren’t finding that mistake on your own, you need an outside reader.

What happens if you are using Microsoft Word? Well, you select a bunch of text, copy, cut, then open a new scraps document file and paste it in praying you don’t lose it along the way. Oh, but you most likely lost the page styles including their sizes. Probably lost other stuff too.

It was a really sad day when IBM sunset Lotus SmartSuite. Sadder still that our Federal government didn’t force them to Open Source the code so someone could maintain it. We really need the Federal government to force IBM to release the source code, build configuration, and all development documentation. This is some abandonware we should never have lost. We could probably get it ported to Linux without a huge effort, especially if it was cleaned up to be Wine compatible.