Experience, Information Technology, Thank You Sir May I Have Another

This is an updated version of a post I made on Interesting Authors blog also called Submission Rules. There is a limit to how geeky I can get when writing posts there as most come to read some interesting prose and a few tips from the trenches when it comes to writing.

Featured image by succo from Pixabay

A while back an email with a link to this arrived. Yes, the only thing you need to do is create a Web site for a book you’ve published and put on it an email address you look at once in a while and you too will suddenly get lots of unwanted email offering you publishing services and to help you spend that inheritance that Nigerian Prince wants you to help them recover. Occasionally, something useful shows up. This particular link was useful, or so I thought.

I mean, even if there wasn’t any payment, some offshoot of WIRED magazine should generate great publicity, right? I mean they are supposedly the “tech gurus Wired into the world of technology,” right?

Then I saw the submission rules

Professionals don’t use Microsoft products. Shouldn’t Wired know this? Why is it one of their rules?

I politely pointed out the fact that Wired Magazine was living in the 1990s with my submission. Honestly, I didn’t bother to think of it much after that.

The rest of the inbound email is just the description of the book and author BIO. They had a few requests about not wanting the content to be published elsewhere, etc.

“If you didn’t think much about it after that, why are you writing this post?” you ask.

Today I got a bit of a snip in a reply. No I’m not going to finger who did it. I’m not that much of an unwashed rectal sphincter.

Yeah . . . If you were “Better Homes & Gardens,” “Popular Science,” or any of the old industry magazines, you could say that and be forgiven. They don’t claim to be “Wired.” They can be forgiven for having a dusty old curmudgeony bit of tech to put out their magazine. “WIRED” can’t.

That’s why you are reading this post and that’s why I withdrew my submission. 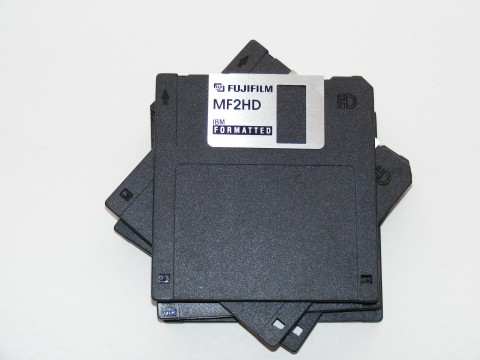 Now that I think about it, I guess I should be glad they didn’t have us mail in 1.44 Meg floppies.

You would think a magazine covering the field of technology would have a hosted limited functionality word processor where submitors could request an account, then write or paste in their submission using only the limited set of fonts and features available in the hosted word processor, wouldn’t you? Maybe they could read this article to get some ideas about word processing technology as we approach 2020?

As a technology professional who has written more than a few books on software development, this submission rule invoked serious visual memories.

Are they all diligently typing away on their Compaq portables using Microsoft Word for DOS? How many of you actually owned a “sewing machine?” I did, but the brand wasn’t Compaq.

Perhaps they’ve upgraded to “the lunchbox?” Newer models of the venerable “lunchbox” are actually available today from different manufacturers. Why? Sometimes you need a portable computer with slots. Custom boards get made for desktop computers and you need them to fix stuff in the field.

Microsoft Word and Times New Roman font rules conjure up images of dead broke startups using cast off 1970s office furniture with the garish colors so popular in the day.

You can probably get a deal on that stuff today. 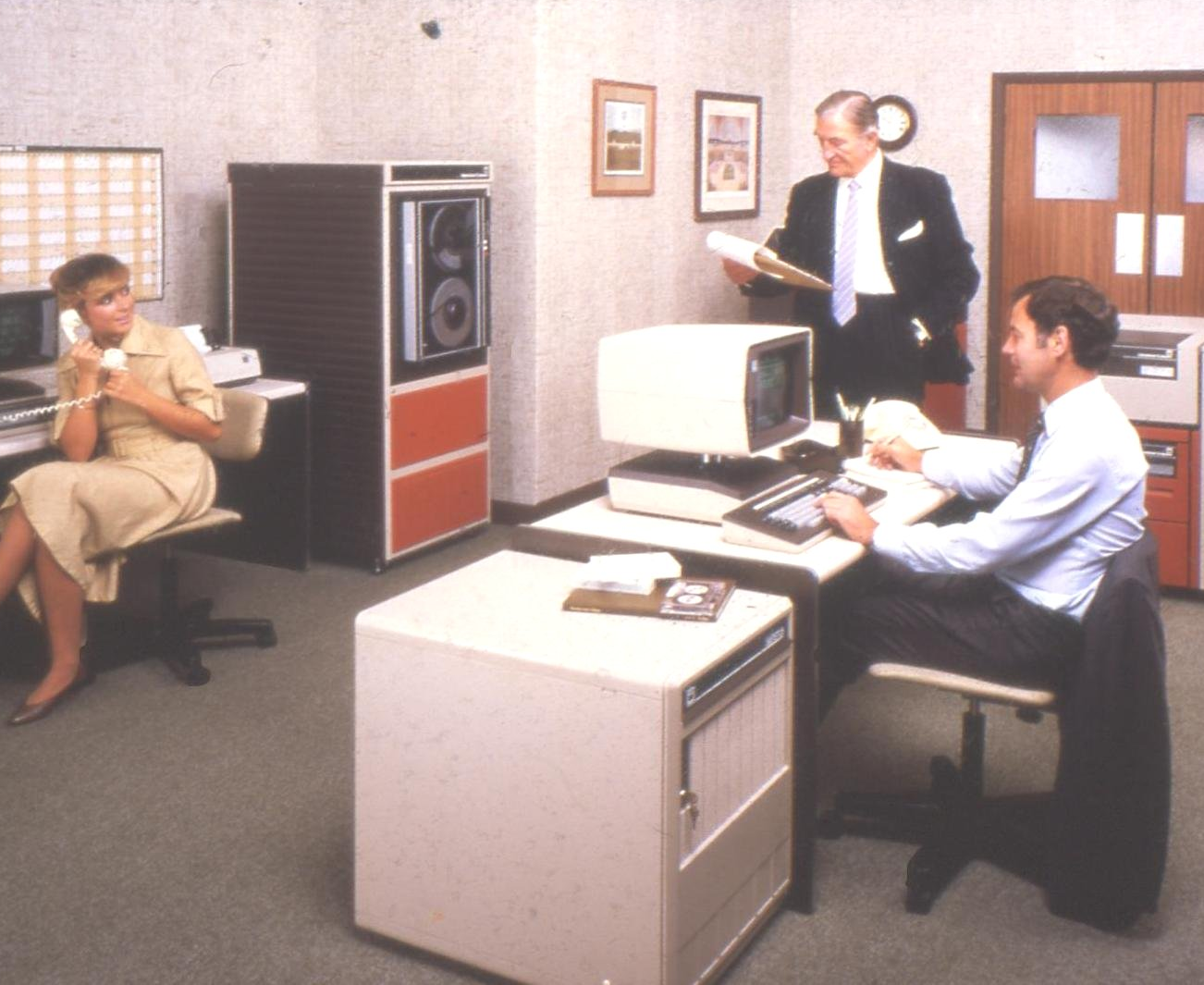 How many of you remember working in computer rooms like the one above? Not exactly like that but upright tape drives and incredibly loud colors, yeah. Been there, done that. It isn’t exactly “modern” but might be “retro trendy.”

These you can still buy today. Those Steelcase desks with the peg legs were regrettably built to last forever. Those ugly chairs you had to hold the base on then spin to raise/lower. No matter what you did they were uncomfortable to type in. After +-4 hours of typing, even in an air conditioned office your ass was wet with sweat when you got up. It’s like they were a microwave oven which didn’t require power. 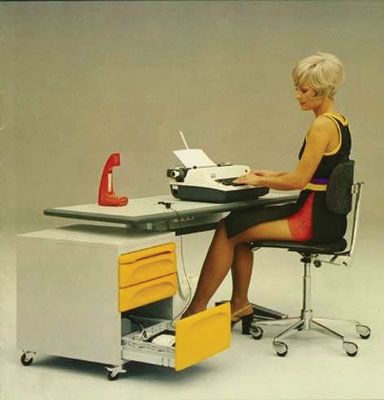 Yeah, women really did wear skirts that short into the office. In part it was a defense against having to sit any length of time in the previously mentioned red chairs. In larger part though, women knew how to be women then. They also tended to only dress like that in offices where guys wore good suits that looked nice, not the cheap polyester shit. It was their way of saying thank you for attempting to be eye candy to us. The casual dress codes of today really made working in an office just like working in a factory. It used to be something you could be proud of. People used to look forward to going into the office and working the occasional weekend.

That all changed when people who put no effort into their appearance got put in charge of the dress code. First they banned Capri pants on casual Friday. Then they kept restricting the dress code until the only outfit which wasn’t in violation of it was an ankle length moo moo. Without any incentive to show off by dressing nice, guys went back to wearing the cheap ass polyester machine washable dress clothes and people began hating going into the office. 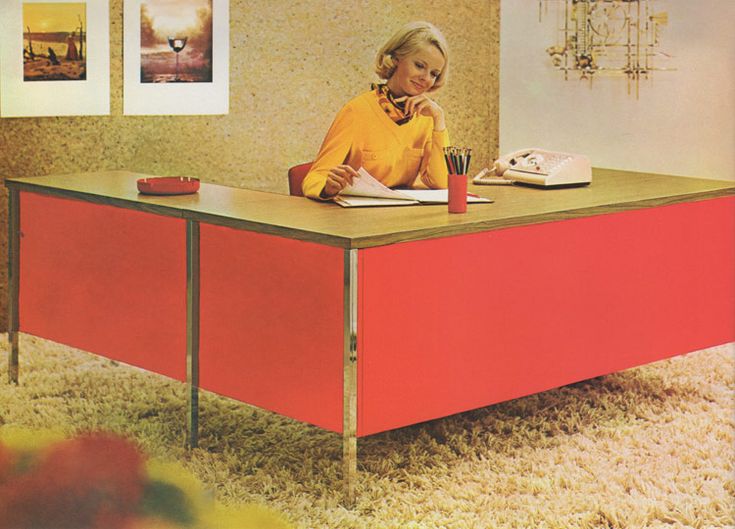 Just imagine having to go into an office with shag carpeting, a desk that loud, and being forced to wear an ankle length moo moo. She wouldn’t be smiling.

By-the-by, that’s not a textured back wall, it’s shag carpeting as well. Notice the ash tray. People used to be able to smoke at work too.

At any rate. This is the mental journey one goes on when the “submission rules” requires Microsoft Word and Times New Roman font. A bunch of this furniture, probably with the original shag carpeting still in the office, a Compaq computer running Windows for Workgroups and Microsoft Word.

No Hats on Backwards

Only nobody working here is dressing for success or to impress. Showing up in their grungiest “casual grunge” and loser dudes with a hat on backward. How do I know they are loser dudes? They aren’t welders so they have no earthly reason to wear a ball cap backwards other than to signal to the world they are a loser. 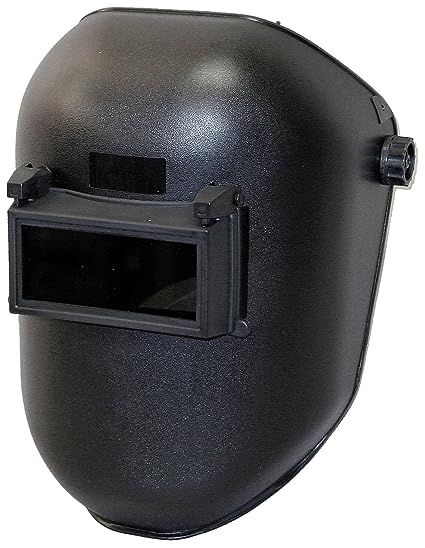 A welder has to wear the hat backwards so they can wear the welding helmet. When welding overhead at odd angles the bill also helps keep hot sparks from going down the back of their neck.

Like I said earlier, if this had been some old world magazine which came up from manual typewriters I wouldn’t have cared. They simply got to a tech level in the early 1990s which allowed them to function and they stopped investing in tech. So be it. This was a submission rule from part of WIRED and it was just sacrilege.

Admittedly the “would be well advised” phrase set me off a bit too because it is painfully obvious they don’t know enough about technology or writing trends to be giving advice to anyone.

Doesn’t matter what the truth is. That’s the image the rules present to the tech world.

Maybe it’s time for WIRED to follow in the footsteps of John C. Dvorak and just start mining their journey for a “Whatever Happened to” book. Be very careful about the name because I do believe he trademarked it. Honestly, kids today need to read the journey he is on because the tech world is recycling its failures as new products.