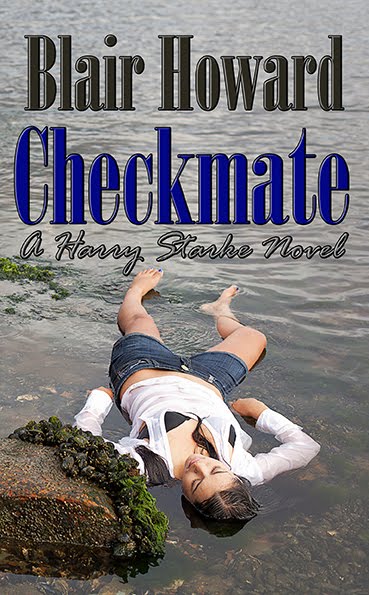 Checkmate is the fourth standalone novel in the Harry Starke series of mysteries.

Angela Hartwell lay dead in the shallow waters beside the golf course. There was not a mark on her, yet she had been strangled. How could that be?

Once again, it’s up to Harry Starke to find out. The investigation takes him into a world he’s very familiar with, a world of affluence, privilege, and corruption.

To solve the mystery, he must deal with three murders, a beautiful used car dealer, her lovely twin sisters, and a crooked banker.  Not to mention Burke and Hare, two crazy repo men who will stop at nothing to protect their employer’s interests. There’s also the matter of an ingenious, sadistic killer. But nothing is ever quite what it seems….

Harry Starke is a hard-boiled private detective, an ex-cop, a tough guy from the right side of the tracks with finely tuned senses, good instincts, and friends in high places.

It’s been less than a year since I decided to try my hand at writing detective novels. It was something I’d wanted to do for more than 30 years. The first book in the series, Harry Starke, was published in September of 2015 and was quickly followed by two more, Two for the Money, and Hill House. All three are, I’m happy to say, doing quite well. Harry Starke has just received its 39th review, and is rated overall at 4.5 out of 5. Even the few 3-star reviews are good. Thank you one and all. And so the series continues with Checkmate, the 4th in the series which was published in February 2016. Family Matters will be available sometime in early April, and I continue to try to write the best detective novels I can. Speaking of which:

It ain’t easy folks. To write a true who done it is in itself a puzzlement. The task is to craft a believable story, a mystery that will keep the reader guessing right to the end, to hide the solution in such a way that when revealed the reader says: Wow, I didn’t see that coming. To do that, I have to hide it from myself. I never know the solution to the mystery myself until the story is almost complete. You can’t cheat the reader. The solution must be believable. You can’t make the perp some obscure character that’s mentioned only in passing, nor can it be the obvious choice, although I have seen that done.

The solution to Hill House came to me in a flash of inspiration as I was writing the third to last chapter. Up until that point I had no idea ‘who done it,’ then suddenly, the light went on, and I had it. When it happens, and it always does, it’s a moment like no other. When the solution to Hill House came to me, I sat there and smiled at the screen. It was the same with the first two Harry Starke novels, but Hill House was different. I wasn’t expecting it, at least not then. Wow. It’s moments like that I live and write for.

All of my detective novels start out the same way, with a single scene. For Harry Starke, it was a beautiful girl jumping off a bridge at midnight. In Two for the Money, it was a late night phone call. Hill House? The body of a girl long dead discovered under the floorboards of a derelict house. For my new novel, Checkmate, it’s the discovery of a body on a golf course. Once I have that first scene, I look for photographs I can use for inspiration. I take that first scene and I play with it. I ask myself the eternal questions: Who? Why? How” When? The answers to those questions, how Harry Starke and the rest of the characters handle them, drive the story to its conclusion.

I have to confess that ideas for my detective novels don’t come easy. No, I don’t suffer from writer’s block, but if I didn’t manage to find those first, inspirational scenes, I probably would. Where do they come from? They are everywhere. Life is full of such scenes. All you have to do is recognize them, grab them, and then develop them. Hill House came from an old three-story house, now demolished, that I passed by several times a week on my way into town. Each time I did, I saw it out of the corner of my eye, and it intrigued me. The opening scene in the first Harry Starke novel, the suicide, came to me one day several years ago as I stood on Walnut Bridge and looked down into the water. You’ll know them when you see them.

Finally, to write a true detective story is to have more fun that any human being deserves to have. Who said that? Dave Ramsey, I think. No matter. It’s true, and I am ever grateful to my readers and the validation they provide.

Blair Howard is from a small town in England, near Stratford-upon-Avon, on the edge of the English Cotswolds. He is Kentucky Colonel, an honor bestowed upon him in 2008 by the then Governor of the Commonwealth of Kentucky, Steven L. Beshear. Until 2015, he wrote sweeping historical epics, and is the author of five historical novels. In July of 2015 he decided to try his hand at writing mystery novels, thus we have Harry Starke. The first in the series, Harry Starke, was released in mid-September 2015. The second novel, Two for the Money, was released October 19 the same year, Hill House, in mid-December 2015, and Checkmate in February 2016, and there are more to come.

Blair is the author of more than 40 books and more than 4,500 magazine, newspaper, and web articles. His work has appeared in many national and international publications, including Delta’s Sky Magazine, PHOTOgraphic magazine, The Mail on Sunday, The Walking Magazine, Petersen’s Hunting Magazine, The Boston Herald, The Detroit Free-Press, The Anchorage Times and many more.